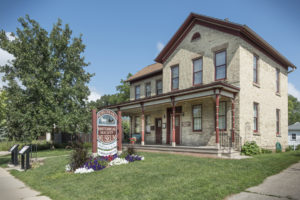 The Rowley House, built in 1868 by Middleton Doctor Newman C. Rowley, was constructed for a total cost of $800.  The 30,000 yellow-clay bricks were thought to be from a brickyard in Pheasant Branch.  In July of 1868, the house was insured for $2000.  The Rowley House is a common 19th century residential vernacular form (domestic and functional) known as a Gabled Ell.  This style was quite often found in rural Wisconsin.  The porch provides the only ornamental details in the form of brackets and turned posts.  Stone lintels and sills frame the double-hung sash windows; muntins separate the six individual panes in each sash.

The two-story house was occupied by Dr. Newman C. Rowley until his death in 1871.  He was the first of three generations of Rowley doctors to reside in the house at 7410 Hubbard Avenue.  His son, Antinous A. and grandson, Antinous G.  (commonly referred to as A.G.) carried on the family’s medical legacy as they cared for Middleton area residents. The house served as a residence only and was never used as a Doctor’s office.  A.G. Rowley grew up in the house, but lived there only a few years while practicing medicine.

Arlene Rowley Morhoff (daughter of Dr. A.A. Rowley and his second wife, thus A.G.’s half sister) continued living in the home until her death in 1988; hence the home witnessed 120 years of unbroken Rowley family occupancy.   Arlene’s son Dan Morhoff inherited the house and offered it to the Middleton Area Historical Society in 1989.  Mr. Gilsie T. Techam, a local farmer, donated the money to purchase the house.

The Middleton Area Historical Society, a private non-profit organization now owns and operates the Rowley House Museum.  Many of the old artifacts are now on display in the various rooms that are open to the public for viewing (1-4 pm, Tuesday & Saturday, mid-April to mid-October).  The Rowley House is a Middleton Landmark and was placed on the National Registry of Historic Places in 1999.

Over the years, a few home repairs have been necessary:  a new front porch in 1995, the building of the carriage house (an adjunct to the house that contains many additional artifacts), the replacement and enlargement of the back porch, and most recently the renovation of the kitchen and bathroom (including new floors).  These projects have been completed with the hard work and dedication of many Historical Society volunteers.